In this issue of BluesNotes, I’m going to be quoting from David Honeyboy Edwards’ remarkable memoir/biography The World Don’t Owe Me Nothing. It is the most vivid and revealing memoir, and contains some of the most beautiful language and expressions I’ve ever seen in print. Though he has passed away now, in this book Honeyboy comes alive again. Go buy a copy. 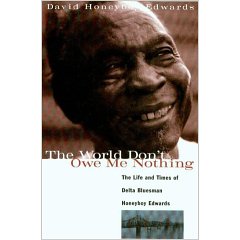 From The World Don’t Owe Me Nothing, David Honeyboy Edwards, as told to Janis Martinson and Michael Robert Frank, Chicago Review Press, 1997:

“Wolf went in the army in ‘45 and when he come out two years later he made a couple of little numbers for Sam Phillips at Sun Records. And when he come out of the Army he got that G.I. loan and bought him a couple of old tractors and forty acres. Then luck come to him out of the deep blue sky. The two years following, that was the best crop years since back in the twenties and Howlin’ Wolf made money. In ‘48 he drove the blues away then! He made a whole lot of money in ‘48, and he bought a brand-new DeSoto station wagon. Wolf always wanted to play music, so he quit that farming and left for Chicago. Willie Johnson went with him. When Wolf come to Chicago he made it with that harp. He cut a right-of-way with that!

“Howlin’ Wolf was a kind of quiet type; he didn’t raise no lot of hell. He always just played his music and paid his boys alright, but he could be kind of mean if you make him mean. He didn’t take too much shit. One time him and Willie Johnson got to arguing, and Willie went after Wolf with a knife. Little of Willie run him all around the room and then outside and down Sixteenth Street in the dark. Wolf was running down the street, then all of a sudden he stopped and turned. He had a pistol in his hand and he pointed it at Willie and said in the big old voice of his, “Willie, I done got tired now.”

“B.B. had quit singing with the choir and come into Memphis then. He was playing in the Beale Street Park and a disk jockey, Nat D. Williams, heard him play and carried him to the radio station. He gave B.B. his name, “Beale Street Blues Boy.” Everyday B.b. would broadcast over WDIA for Pepticon, the medicine company. that’s when he got his little old band together. He had a 1948 MErcury Ford, yellow, club coupe. Him and his band went everywhere, playing Arkansas, Missouri, all the cotton patch countries. he played lead, and he had a drummer and a bass guitar player—that’s all he had….”