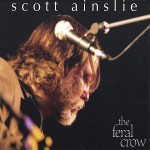 I’m gonna blow off the top of this mountain
And fill up the valley below.
Before we get done, the dust will block out the sun
And we’ll peel back the layers of coal.

She was both young and beautiful;
Unspoiled, high and low.
But they’ve killed her babies in her nest:
She is the feral crow.

It’s a clean cut when the knife is sharp.
It’s the dull knife, leaves a scar.
And how she shines, both black and blue;
Her talons, cruel and sharp.

One night, her beak will crack the earth
And swallow it in the dark.
It’s a clean cut when the knife is sharp.
It’s the dull knife, leaves a scar.

There’s a yellow band around her eye,
Just like a wedding ring.
The farmer he will track her down
And kill her before she sings.

It’s a clean cut when the knife is sharp.
It’s the dull knife, leaves a scar.
And so she moves from pine to pine,
A sorrow, in her breast.

And she’ll put out the miner’s eyes…
And put coal dust in his chest.
And it’s a clean cut when the knife is sharp.
It’s the dull knife, leaves a scar.

I’m gonna blow off the top of this mountain….
And fill up the valley below.

Heading south on the West Virginia Turnpike, in October of 1993, and listening to West
Virginia Public Radio; I heard a program on ‘mountaintop removal mining’. Frankly, I couldn’t believe what I was hearing. In order to compete with Western surface coal, the eastern coal companies were advocating blowing off the tops of up to 3% of all the mountains in West Virginia, bulldozing the cap rock into the adjacent valleys and strip mining the coal. The level of disruption and destruction of the environment that was being discussed and advocated was—and now is—staggering.

At that time, I was also working on developing the first annual “Musician’s Homecoming”
concert—a benefit for the local battered women’s shelter in southwest Virginia—while I
was working as an artist-in-residence at Wytheville Community College. Many fine musicians playing jazz, bluegrass, folk, country and blues all came together to raise funds and donations for the shelter on the first Saturday after Thanksgiving.

The violence against the mother evident in all this spilled out in a form that betrays my
years of loving Appalachian ballads and playing old-time fiddle and clawhammer banjo. It may also be considered an hommage to Ted Hughes.