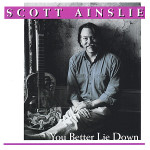 This tune is played on the L’Arrivee, in standard tuning in the key of C. What can I say? There are no secrets here to make this easier. Play on.

Written by Oris Mays, I learned this solo guitar arrangement of it from the wonderful playing of Dreddie Manning, a lay preacher and legendary former blues player from the Lake Gaston area of North Carolina, near Roanoke Rapids. After years of trying to find Manning on field trips to the area, I finally caught up with him in his cinderblock church next to the trailer that is his office and studio on his property. When I askedhim if it would be alright to record him, he said that would be fine and pulled out his video camera to record me and record me recording him. He played for my machines and I played for his. This kind of leveling of the playing field was a sea change in the realm of folk music documentation and pleased me no end. Dreddie liked my National and played it for the taping. The guitar part speaks for itself: he is a remarkable player and singer who looks great in polyester pastel suits and tux shirts.