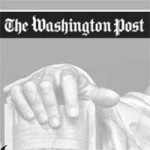 One recent evening, while much of the world seemed to be captivated by Taylor Swift, I was lucky enough to escape to a nondescript diner in Rockville, along with about 30 other people, for a riveting and thought-provoking performance by Scott Ainslie, a graying but nimble folk singer and composer from rural Vermont whose music I had come to know through mutual friends in Chincoteague.

Scott is the kind of musician they don’t make any more, in the mold of the late Pete Seeger – unpretentious, dead serious about his craft, dedicated to preserving traditional American music and instruments, unabashedly faithful to left-liberal values, and so versatile he can make you weep one moment over the story of a dying steel town (“all these houses for sale, and ain’t none of them sold”) and snicker appreciatively the next at a driving Mississippi blues song full of earthy innuendo.

To make this rare appearance in the D.C. area, Scott shoveled out several feet of snow from his driveway in Vermont and drove to Maryland with his dearest possessions, including a single-stringed African style banjo made from a gourd, a genuine 1931 National steel guitar, and a rich-toned Gibson from the same era that sounds like it was born to accompany his molasses-tinged voice.

He worked hard for nearly two hours, at $15 per ticket– scowling over tricky chords, falling silent to let his guitar finish a verse, tearing with emotion over the recent death of his brother, and recounting his hilarious adventures in the Delta in search of a reclusive old bluesman.

Scott’s voice can be both plaintive and strident, but his ear is remarkable. He is a white man who sings a black man’s laments without a trace of self-conscious irony, a northerner who sings southern bawd without an apologetic leer. That night he played a few tunes from his new CD, “The Last Shot Got Him,” a collection of traditional guitar and blues music named after a tune by Mississippi John Hurt – plus a quiet, poignant version of “Somewhere Over the Rainbow.”

But I’m drawn more strongly to his original compositions, on earlier CD’s like “The Feral Crow.” Their tone is often melancholy; their message stoic or frankly subversive. “Don’t Obey,” an Iraq-era anti-war ballad as powerful as Dylan’s “With God On our Side,” urges soldiers to disobey immoral orders (“even all wrapped up in bunting, a lie is still a lie,” he sings). “When Our Loving Begins/Requiem” is a haiku-like tribute to redemptive love with a haunting, minor chord accompaniment by Scott’s friend Al Pettaway, who wrote the music shortly before 9/11 and rededicated it as a memorial.

That night in Rockville, I asked him to play “When Our Loving Begins” as well as the steel town saga, “It’s My World Too,” which gave me chills and, like much of his work, evokes the inexorable sweep of forces that kill the human soul. (“We built the United Nations and the Empire State, but next week they’re locking the gate.”) The diner was half-empty, and the audience was middle-aged. I kept wishing more people were there to hear him, and to go home afterwards feeling both pensive and uplifted.

Scott told me he didn’t usually play requests, and I will always be grateful that on one night, he did.

Pamela Constable covers immigration issues and immigrant communities. A former foreign correspondent for the Post based in Kabul and New Delhi, she also reports periodically from Afsghanistan and other trouble spots overseas.