Traveling With A Guitar 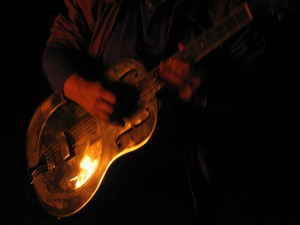 I’ve spent forty-seven years traveling with guitars and working with people who travel with instruments. I’ve had near catastrophes and witnessed many more.

There are things that are obvious to me, that may not be obvious to, um…civilians. I offer these only to be thorough and useful. I’m not assuming you don’t know them. I’m just thinking about preventable disasters and how, if I didn’t mention a few of these, what a bone head I would feel like after something bad happened. I’m an Ainslie. We’re all like this.

As a principle, you’ll profit by thinking of your guitar as the beautiful little 9 month old child. (The good news is, it doesn’t cry. The bad news is, it can’t let you know it’s in trouble.)

When I’m on the road, every day is Take-A-Guitar-To-Lunch-Day. If the other people didn’t get the memo, their guitars are the ones being stolen out of their vehicles in the parking lot.

You can make good friends with many people simply by taking the instrument with you, even into crowded restaurants. Explain to them that it’s only one year old and it’s afraid to be alone…

Inside, traveling or not, the most common mistake we have all made and most of us have paid for is this:

…On a bed, a couch, leaning up against a chair, in a corner, on a table, or in an unlatched case.

The case, which is the best of these options when you go to put the instrument down, will only keep it safe if you close the top and throw at least one latch, even if you’re only putting it down for a minute.

Reread the previous sentence. Make a habit. Then you won’t have to look at me guiltily later. We’ll all be happier.

If you don’t throw at least one latch…

(drum roll please…we’ve all done this; some, sadly, more than once)

…you or someone else will grab the handle of the case, thinking it is latched, and pick it up. This will open the case lid and toss your guitar onto the latches, and thence, the floor.

Look at the latch on the top of your guitar case. Most of them will very effectively punch a hole in the front of your guitar. That latch is just lying in wait for a chance to do it. Don’t trust it. Unlatched, it is evil. Also when you let go of the case, make sure it is resting horizontally. Think of carefully placing it where it would fall, if bumped. (No use breaking the headstock off it for want of forethought.)