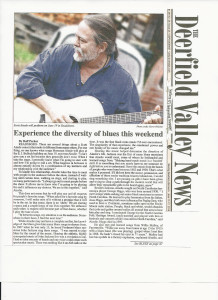 Experience the diversity of the blues this weekend
by Rolf Parker

READSBORO, VT–There are several things about a Scott Ainslie concert that make it different from many others. For one thing, no one knows what songs bluesman Ainslie will lay at the E. J. Bullock building on June 19, not even Ainslie.

“I can’t give you a set list because they generally don’t exist. When I take the stage, I generally know what I’m going to start with and how I’m going to end a set. What happens in between is almost entirely driven by a combination of my instincts and my relationship with the audience.”

To kindle this relationship, Ainslie takes the time to meet with people in the audience before the show, instead of waiting until curtain time, waling on stage and starting to play, as many performers do.

“I always go out to meet people before the show. It allows me to know who I’m going to be playing for and it influences my choices. We are in this together,” said Ainslie.

This does not mean that he will play any and all requests for people’s favorite songs.

“When asked for a favorite song by someone, I will make note of it without a promise that it will be in the set. In that sense, there is no ‘show.’ We are sharing a space and a couple hours of our lives together. We influence each other. A request will become part of that dance, whether I play the tune or not.

“In between songs, my attention is on the audience. Somewhere in their faces, I find the next tune.”

While Ainslie may not have a complete set list, his knowledge of the blues gives him many blues songs to choose from. In 1967, when he was only 15, he heard Piedmont Blues musician John Jackson play three songs.

“I view the work of an artist the way a Shaman or Griot might regard their work in a more traditional society. In some tangible and intangible ways, we hold up a mirror to the world, the society, or an individual and we ask, ‘Are you happy with this? This is who we are. Are we Doing Well? Could we do better?’”
– Scott Ainslie

“I was moved to play blues by the sound of the music. Hearing the athletic, highly syncopated music of John Jackson live was a revelation to me. I had no idea one pair of hands, and one voice, could create such spectacular music. There was nothing like it on AM radio at the time. It was the first black roots music I’d ever encountered. The singularity of that experience, the emotional power and raw beauty of the music changed me.”

Hearing this music helped determine the direction of Ainslie’s life. Jackson was the first of many blues musicians Ainslie would meet, some of whom he befriended and learned songs from.

“Making hand-made music is a ‘handed’ sill. It is something that you nearly have to see someone do right before you to understand. I have this music from the hands of people who were born between 1882 and 1930. That’s what makes it personal.

“If I did not have the assent, permission, and affection of these senior tradition-bearers behind me, I would sing something else. I am passing on gifts I have been given and trying to clear a path through the modern world that will allow their remarkable gifts to be heard again, anew.”

Besides Jackson, Ainslie sought out North Carolinian harmonica player George Higgs, who was born in 1930.

“I met George while seeking out senior black musicians in eastern North Carolina. He learned to play harmonica from his father, Jesse Higgs, and they both were influenced by Pegleg Sam, who used to have a 15-minute, noontime radio spot on the Rocky Mount radio station.

“People, black and white, would abandon their jobs and gather around radios all around that area to hear Pegleg Sam play and sing. I nominated George for the North Carolina Folk Heritage Award, and traveled and played with him at festivals and concerts while I was still in North Carolina,” said Ainslie.

He also met and learned songs from Willie Malloy, of Fayetteville, NC.

Malloy had lost his eyelids in a factory explosion, explained Ainslie, and returned home to his mother’s household the day before he became completely blind. The last time Ainslie went to see Malloy, he found no one at the family house. Malloy died, according to Ainslie, sometime around 1996.

Another element of a Scott Ainslie concert is the stories he tells his audience. For example, Ainslie told the story of how Malloy began to play gospel music. In Charleston WV, in 1917, Malloy was accosted by a “church lady,” who had heard the music of his blues band.

“You the one makin’ all that racket last night?”

“Gonna be up most of the night…”

“STAY UP. And bring that box with you. We don’t want to hear no blues though.”

“Seventy-one years later, when I met him,” Ainslie said, “Willie could name the street corner they were standing at. She pointed out her church and specified the time for the service. Willie was up most of the night, and he did simply stay up and head to church. He had’t been in a church since leaving home. He played his mother’s favorite song, ‘I Will Trust In The Lord.’ It made him homesick and he quit the band.”

It was while working his way home, Ainslie explained, that Malloy was injured.

“Willie was one of the kindest and most peaceful human beings I have ever met. When he sang, ‘I’m gonna treat everybody right,’ in ‘I Will Trust In The Lord,’ you believed every word. Meeting him was a gift that I continue to try to justify.”

Ainslie’s stories also touch on and elucidate the origins of the blues, a musical tradition that Ainslie said did many things for the African-American communities that it arose in.

“The beauty of the blues was that it was cathartic. It was a balm on suffering that people could not find another way to deal with. It was a way of voicing frustration and rage in a way that did not get you killed, and the heartening thing was that it was also a place where poor blacks and poor whites, living cheek by jowl, could trade music across traditions.”

Besides being a performer, Ainslie is an author an authority on the blues. His book of transcriptions of all of Robert Johnson’s recorded blues songs was praised by Acoustic Guitar Magazine writer Steve James for its “painstaking detail, not only in the presentation of tablature and notation, but in the introductory biography and the deliberate introductory text and lyric transcriptions that accompany each song.”

In a review in the Washington Post, Pamela Constable wrote:

“Scott is the kind of musician they don’t make anymore, in the mold of the late Pete Seeger – unpretentious, dead serious about his craft, dedicated to preserving traditional American music and instruments, unabashedly faithful to left-liberal values, and so versatile he can make you weep one moment over the story of a dying steel town…and snicker appreciatively the next at a driving Mississippi blue song full of earthy innuendo.”

Another thing that makes an Ainslie concert unusual is that he plays some of the traditional instruments that blues musicians inherited from African musical traditions. At the concert in Readsboro, besides his guitars (a metal-bodied 1931 National Resophonic and the little arch-top Gibson from 1934 that is featured on his new CD, ‘The last Shot Got Him’), he will play a fretless, African-style gourd banjo, and a diddley bow, a one-stringed cigar box guitar.

Even the venue for this show is unusual, says Ainslie.

“Readsboro is a vital little community that is endeavoring to create opportunities for people to get together, socialize, visit, and hear some good, hand-made music. Like many small communities in Vermont, it is struggling to keep the centerpiece of the community – its school – alive and creating concerts is another way of nourishing the community. All the voluteers there are doing remarkable work promoting the concert, working to fill the seats, and enjoying each others’ company along the way. There is a happiness to the crew I’ve been working with that can be rare among small concert series developers. It’s worth making note of that and supporting it.”

Ainslie has hopes of being more than an entertainer for his audience.

“What will people get out of an evening with me? The first, easiest, and most common answer is that they’ll be entertained by my life experience with the elders I have known and what I’ve learned about telling those stories and playing music in ways that are fun and effective.

“The second answer might be that they’ll come away better educated and with a bit more understanding and compassion for the strength of the people who could rise above what seem like impossible circumstances to most of us modern Americans and make music that would change the world we live in so dramatically.

“The third, and rarer but not uncommon answer is that someone will walk into the hall with an empty space on their soul’s bookshelf, a wound in their heart, or an unshed tear, and they will take advantage of the stories and the music to explore that private place.

“I view the work of an artist the way a Shaman or Griot might regard their work in a more traditional society. In some tangible and intangible ways, we hold up a mirror to the world, the society, or an individual and we ask, ‘Are you happy with this? This is who we are. Are we Doing Well? Could we do better?’”

Ainslie will be performing for the community at the historic E.J. Bullock Building, 7012 Main Street in Readsboro VT on Friday June 19, from 8-10:30 p.m.