Prompted by a recent article in the Times, the notes in this issue of BluesRoots pertain to a part of our history at which no one even hinted during my sixteen years of undergraduate study. It has been astonishing to discover. Good reading. 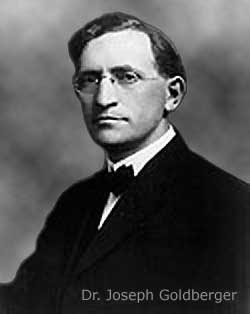 In a recent article “The New Yorker Who Changed the Diet of the South” by Howard Markel (NY Times of August 12, 2003); Dr. Joseph Goldberger’s efforts to uncover the dietary deficiencies that led to Pellagra are wonderfully recounted. Goldberger came out of slums of the Eastern European jewish neighborhoods of the East Village in New York City and by his audacity, curiosity and strength of will–when measured by the lives he changed—became one of the most significant public health workers the country has ever known, by prescribing brewer’s yeast as a dietary supplement for the South’s poor, black and white. As Markel writes, “It was not until 1937, eight years after Goldberger’s death, that biochemists at the University of Wisconsin identified the exact chemical root of the dietary deficiency that causes pellagra: Niacin.”

Pellagra was epidemic in the poor South right up into the mid-Twentieth Century. The symptoms of Pellagra weren’t only “The Four D’s” mentioned in medical texts: diarrhea, dermatitis, dementia and death. They included weakness, tiredness, trouble sleeping, loss of appetite and indigestion, disorientation, disinterest in one’s surroundings and a pronounced inability to make connections between causes and effects, headaches, dizziness, muscular tremors and mental disorders. In short, the characters portrayed in the racial and class stereotypes of the black-faced minstrel shows of the Nineteeth Century—the lazy, shiftless, stupid, funny, disoriented negro as well as the ‘poor white trash’ of Southern stereotype were all based upon the behaviors of people suffering from the effects of a diet based almost solely and universally upon cornmeal, fatback, molasses and beans—-a diet chronically deficiency in Niacin.

Good sources of Niacin (Vitamin B3) include: liver, lean red meat, whole wheat products, fish, eggs, roasted peanuts, white meat of poultry, avocados, and brewer’s yeast. All foods that were well out of reach of any poor Southern household.

When Goldberger determined that Pellagra was not an infectious, but a dietary disease, and the vitamin B3 deficiencies were remedied with the addition of brewer’s yeast to the diet; the crippling effects of Pellagra disppeared. But the popular racial and class stereotypes remained.

These stereotypes continue to influence race relations today. Consider the humor of “Amos an’ Andy” on fifties television; or the black Crows’ singing, “When I See An Elephant Fly” in Walt Disney’s animated feature “Dumbo”; or the mugging of black characters in “Gone With The Wind” or “Birth of a Nation”; or even in some ways “The Jeffersons”. It seems clear that the resolution of a public health issue has not translated into a concommitant healing of the racial and social stereotypes that were based upon the particular kind of suffering that Pellagra caused.

The scientific racism of the eugenics movement among American scientists—which inspired the U.S. Immigration Restriction Act (prohibiting the immigration of those with hereditary illnesses and entire ethnic groups) was cited as a guiding example for racial purification and the establishment of a ‘master race’ by Hitler in his 1924 publication “Mein Kampf”. Eugenics laws in place in North Carolina in the 1920’s prohibiting interracial marriage became models for the policies of the Third Reich and Germany’s ‘racial hygienists’.

The role that Pellagra symptoms played in laying an ’empirical’ foundation for the ‘science of racism’—and the role that that racism played in inspiring the forced sterilization and euthanization of the undesirable millions of gypsys, jews, and the mentally ill, under the Nazi policies is a bit daunting to consider. But without an appreciation for the dynamics at work in the pellagic human body suffering from chronic Niacin deficiencies; the rise of the social dynamics of racist and classist stereotypes in the body politic makes no sense at all.

It is sometimes said that every stereotype has a foundation in fact, however far removed or exaggerated the stereotypes may be. But in historical terms, it doesn’t seem too much of an overstatement to say that the resulting disease caused by simple rural poverty and poor diets in the American South helped set the stage for the Holocaust. And the history of mutual admiration between American eugenicists, lawmakers, and industrialists (the Rockefellers play a large role in funding racial hygienists research in Germany right up into the 1930’s), and the emerging Nazi policy makers is finally—after sixty years of dishevelling by nearly all concerned—plain for all to see.

“…it should matter whether or not our government is either incompetent and didn’t know what they were doing or were dishonest and refused to say.”