Scott Ainslie immerses himself in rural and working class traditions, and we benefit.

After the latest news cycle, we could all use some rebalancing. Musician, educator and storyteller Scott Ainslie aims to bring a bit of that to his upcoming performance at The Lab on Sunday, Oct. 21.

I’ve been a fan of Scott Ainslie’s music since I heard his first solo CD, Jealous of the Moon, when it was released in 1995. That recording has fantastic renditions of three Robert Johnson songs in addition to interpretations of Van Morrison’s “Crazy Love,” the standard “You Don’t Know What Love Is,” Stephen Foster’s “Hard Times, Come Again No More” and a version of “Wayfaring Stranger.”

Ainslie has subsequently released five more, fine CDs—Terraplane (1997), You Better Lie Down (2002), The Feral Crow (2004), and Thunder’s Mouth(2008). These recordings offer a mix of blues, African-American traditional songs, and originals delivered with skill and emotion. His most recent collection, 2014’s The Last Shot Got Him, has a couple more Robert Johnson tunes, as well as compositions by Irving Berlin and Fats Waller. This CD takes its title from a ragtime blues by Mississippi John Hurt and contains a handful of his tunes as well. Ainslie’s own “Late Last Night” is outstanding.

Scott Ainslie was inspired to take up guitar when he heard the blues artist John Jackson play in 1967. According to his bio, though, Ainslie’s mother found him at the family piano picking out melodies from the records she listened to during the day when he was just three years old.

It seems that music and music education have always been a part of his life. He is a Phi Beta Kappa and honors graduate of Washington & Lee University. He is versed in Southern Appalachian fiddle and banjo traditions, and East Coast and Delta Blues.

Ainslie gives classes and workshops in schools for teachers and students that explore the African and European roots of the music of the American South. He has also received awards and grants to acknowledge and fund his work including support from the National Endowment for the Arts and The North Carolina Arts Council.

I enjoy Scott Ainslie’s music and it is a pleasure to share it on Back Porch Music. But as you can tell there is much more to Scott Ainslie than just the recordings that I play.

Rather than offer a few YouTube clips, I’m going to suggest you head to his website where you can learn much, much more about him, and find links to video performances, instructional sessions and his music.

I saw Scott Ainslie first a number of years ago when he appeared on Woodsongs Old-time Radio Hour (2009, for show #502) for a celebration of Robert Johnson. There were two guests: Scott and the amazing Rory Block. As she is one of my favorite players ever, I had zero interest in this guy Scott Ainslie…until he began to play. And sing.

And then it just got better, and better, and better….because in addition to being a stunningly talented player & singer – and as authentic in the style as anyone you’ll ever hear – he is also a walking encyclopedia of the blues…of American culture…of music.

Read the rest of this April 2017 article / interview:

“…I am interested in venues that are actively building communities of interest and in expanding my touring while I can,” he said. “Hearing that Hattiesburg was hard hit by the recent tornado, I contacted David Walker at the Coffeehouse to offer to tithe a portion of the evening’s proceeds to tornado recovery for the town.

“I am not well off. I am coming a long way to play. But I have my house and my family is safe. There are those in Hattiesburg today for whom this is not true. We have to all make provisions as we can to help our neighbors, even the ones we don’t know.”

The Brain That Changes Itself 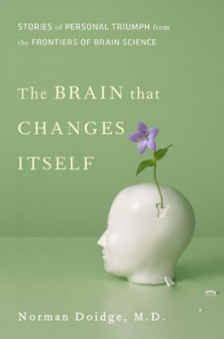 As a lifelong student and a teacher of various things over the past four decades, I have an abiding curiosity and affection for the new brain science, for neurobiology, and practical applications of the new science that is being recorded.

Accordingly this book, The Brain That Changes Itself (Viking, 2007), was right in my wheelhouse. Though not restricted to either music, or to Blues history, I found it moving and interesting. I hope, after reading my thoughts on it, you will, too.

The Brain That Changes Itself:
Stories of Personal Triumph from the Frontiers of Brain Science
By Norman Doidge, M.D. Viking (2007)

As someone who works with brains (my own and those of others), I found this an amazing read.

In the preface, Dr. Norman Doidge sets out exactly what this scientific mystery story is about:

“This book is about the revolutionary discovery that the human brain can change itself, as told through the stories of the scientists, doctors, and patients who have together brought about these astonishing transformations. Without operations or medications, they have made use of the brains hitherto unknown ability to change. Some were patients who had what were thought to be incurable brain problems; others were people without specific problems who simply wanted to improve the functioning of their brains, or preserve them, as they aged. For four hundred years, this venture would have been inconceivable because mainstream medicine and science believed that brain anatomy was fixed…” p. xiii

But, it is not. The brain is plastic.

END_OF_DOCUMENT_TOKEN_TO_BE_REPLACED

Blue Music Magazine, The Last Shot Got Him Review 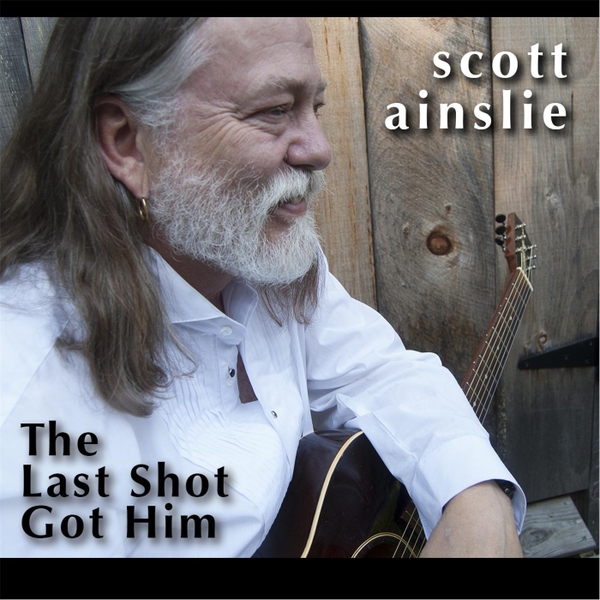 At times on The Last Shot Got Him, Ainslie’s sound will remind listeners of the great acoustic bluesman, Keb’ Mo’. But make no mistake, Ainslie is his own man and makes no concession of trying to emulate Keb’ Mo’. It is only their style and delivery that parallels one another’s.

Ainslie has a love for the song crafting of Mississippi John Hurt, and it is these songs that he chooses to cover most frequently. On the album opener, Ainslie enlists a fretless gourd banjo to recreate the vibe and humor of Hurt’s “The First Shot Missed Him.” Other standouts include the masterfully picked and sung “Avalon Blues,” the high steppin’ jaunt of “Let The Mermaids Flirt With Me,” the uplifting “Sally Whiskey,” the sweetly executed “Honey, Right Away,” the sunny “Monday Morning Blues,” the expressive “Late Last Night,” and the beautifully performed “Over The Rainbow.”

Scott Ainslie is a veteran touring pro who is frequently found performing in venues up and down the East Coast. With a warm, affable persona, and a wealth of musical knowledge, I highly recommend checking him out when he comes to a town near you. You won’t be sorry.

The last time veteran singer-guitarist Scott Ainslie was in Northeast Ohio, he appeared at a late ’90s Rock and Roll Hall of Fame and Museum event celebrating the life of Robert Johnson.

“The first time I heard Johnson’s music I sat down on the floor and stared at the turntable for half an hour and then turned the record over and did it again,” said Ainslie, calling from his Vermont home. “I was transfixed. I think everybody who is interested in blues or roots music who hears Robert Johnson’s music for the first time knows where they were. It’s like Kennedy’s assassination or The Challenger blowing up.

“I was fascinated by his work, and I was delighted to be invited to the Rock Hall as a special guest. I had a lot of fun just walking around. What’s fun about coming now is that I get ot atually play.” END_OF_DOCUMENT_TOKEN_TO_BE_REPLACED

I was trading licks and stories with my dear friend and blues brother, Reverend Robert Jones of Detroit, at the Fox River Folk and Storytelling Festival in Geneva IL over Labor Day weekend. He asked about some Lonnie Johnson licks. We didn’t have time to really explore them together and I promised him a short video. Here it is.

Skype guitar lessons can be arranged by contacting me at scott (at) CattailMusic.com.

Sound Connection at Folk Festival
by Linda Girardi
The Beacon-News

Performers were having a ‘dialogue’ with their audiences Sunday during the 39th Annual Fox Valley Folk Music and Storytelling Festival nestled along the banks of the Fox River on Island Park in Geneva, IL.

“Music reaches into the emotional side of our brains and connects it with the spirit in ways words cannot,” blues artist Scott Ainslie said.

The singer and songwriter said the power of music is partly what pulls audiences and performers together for such musical celebrations.

“I wanted to join in the dialogue,” he said.

Dance and storytelling performances fill out the festival’s eight stages. There also are interactive music workshops for aspiring artists and puppet-making classes for children. Performances and workshops continue through Monday.

Ainslie, from the artsy town of Brattleboro, VT, performed a selection of songs on a 193`1 National resophonic, one of the first self-amplified steel guitars.

He insists music has been part of his life ever since he began picking out melodies on the family piano from records his mother listened to.

For his Sunday performance he plucked a one-string, handmade diddley bow (a cigar box guitar) to the intrigue of audience members.

“Music is a calling – you make it with whatever instrument and influences surround you,” he said.

A day earlier, he was among several musicians who performed for a live WFMT radio broadcast of “Midnight Special” concert in the Unitarian Church in downtown Geneva.

The gentle creak of floor boards and the blue and white stained glass windows of the 173-year-old sanctuary were a refreshing contrast from the unsual venues of these artists.

“The acoustics are amazing here,” songwriter and musician Joe Crookston said during a sound check for the sold-out concert.

Crookston made the two-day trip from Ithaca, NY to perform in Geneva.

“I am inpsired by the human potential – people tapping into who they really are and then expressing that. The world becomes a more beautiful and magical place,” he said.

Linda Girardi is a freelance reporter.

“The Last Shot Got Him” is a project by Vermont singer/songwriter, guitarist/historian Scott Ainslie that was put together over the love of an instrument. The guitar in question was a unique 1934 Gibson archtop, which a friend played for Ainslie.

The material on the disc all dates from 1928-1941 with the exception of the Ainslie original “Late Last Night” from 2008, which is based on the Russian invasion of the country Georgia. That tune, though, has the feel of one from the 1930’s and blends in with the rest of the material.

While a lot of “The Last Shot Got Him” are blues tunes per se, some like Irving Berlin’s “Say It Isn’t So” (made famous by Sippie Wallace) have more Broadway in their roots. Delightful is the remake of “When I See An Elephant Fly” from the 1941 Walt Disney movie “Dumbo.” Included are Robert Johnson’s “Cross Road Blues” (or, as you Cream fans know it, “Crossroads”) and Johnson’s “Love In Vain.”

Closing out the proceedings is a heartfelt version of “Over The Rainbow” from “The Wizard Of Oz.” While it won’t make anyone forget Judy Garland (to tell the truth, nor Livingston Taylor’s stab at it), it is great hearing this magical tune (which the stupid suits at MGM almost left out of the flick until saner, smarter voices prevailed).

Mostly done with just Ainslie’s voice & the acoustic guitar (exceptions being the banjo added on “First Shot Missed Him” & “Honey Right Away),” it boils down to if you like old time country blues, you are really going to like “The Last Shot Got Him.”