The Land That I Love

The Land That I Love
©2009, Scott Ainslie. All rights reserved.

For Grecia Cruz, who crossed into the Tohono O’odham Reservation desert and was lost June 23, 2007.

I go to the market – in the town, ‘ I was born.
It’s full of cheap clothes from China – and American corn.
But we have a small farm – that we water with tears.
How can we compete? The gringo farms are so big. Now we cannot stay here.

And why would I leave – the land that I love?
Consuela, Rosalita? Mama y Papa?
My grandfather’s bones are up on the hill.
If it weren’t for low wages – I’d be living there still.

So, we paid the coyotes. We rode in the van.
We walked in the desert; lost in this land.
Her feet were so blistered – that she could not go on.
When I left her I kissed her. When I came back, she was gone.

And why did we leave – the land that we love?
Consuela, Rosalita? Mama y Papa?
My grandfather’s bones are up on the hill.
If it weren’t for low wages – I’d be living there still.

Jésus was a poor man – who suffered and died:
A crown of thorns – spear in his side.
He said, ‘Father forgive them. They don’t know what they do.’
But I’m sorry my friends, when we come to the end, how can we say that of you.

Who cares if your markets are free?
Look what you’ve done to my wife and me.

“I’m out here against all odds because if it was my daughter, if it was my wife, and if it was my baby, I wouldn’t stop. And so you have to do the most you can.”

–Mike Wilson, Tohono O’odham Tribal Member during the search for Grecia Cruz and her uncle, migrants lost in the Sonoran Desert.

I write songs when I have to.

There are plenty of good songs in the world. And I am content to sing them – until there is something that needs saying and is not being said.

Grecia’s story needs to be heard. As does the story of the manipulation and victimization of hard working people by corporations and governments on both sides of our southern border.

The Land That I Love had to be written. And it had to be tested.

I took it to two dear and trusted musicians and friends: singer, saxman, and accordionist Dr. José Cuellar (the leader of Dr. Loco’s Rockin’ Jalapeno Band) and guitarist Tomás Montoya.

“This is not my song,” I said, “You have to tell me if I’ve got this wrong. I’ll scrap the song if it doesn’t feel right, respectful, and useful to you.”

The Border accordion and Latino nylon-string guitar you hear on the recording in the hands of José and Tomás, respectively, are their testimony. They donated their work to bring the song to life.

The instrumental break in the song was a gift from Tomás. When Tomás first heard the song, he mentioned that the melody and chord changes reminded him of La Golondrina (The Swallow) – a traditional, poignant, and hopeful song of parting that is sung at funerals, birthdays, and weddings.

The metaphor of La Golindrina plays on the fact that the swallows who depart in the winter, return in the spring. I listened carefully to the traditional piece and quoted from it in the instrumental break in hopes of awakening the song in the hearts of Latino listeners.

I hope that you will listen and be moved to learn more about NAFTA and the role that US trade policies and globalization play in manipulating labor on both sides of our southern border and in creating the pressing needs that are driving immigration. 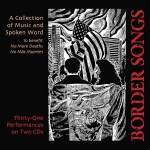