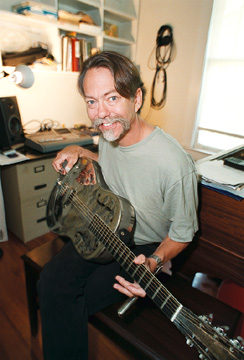 It is a June night in Belfast, Northern Ireland, and Durham’s Scott Ainslie commands the stage at the renowned Empire Music Hall. Armed only with his silver-bodied resonator guitar, a booming voice, the songs of his region, and the stories which give those songs context and resonance, Ainslie holds the rowdy crowd’s rapt attention. An ocean away from North Carolina, Ainslie is strangely at home: He is an outsider, a humble and able ambassador of the Piedmont and Delta blues.”I’m on very thin ice as a white man playing traditional black music,” Ainslie observes. “I know this every day. I pray not to offend but to honor and support the teachers and the music I love. It’s a privilege to make and to know this music,” he adds. “I have worked hard on it, to walk somehow along this path without doing damage to the cultural ecosystem I’ve inherited and to contribute something of value, more in my live shows even than in my recordings. Because it is human capital I am interested in–real contact with an audience and the exchange of words and musical phrase.”

His recordings succeed in similar ways, however, to both challenge and enrich the audience by his meticulously faithful interpretations of the masters and his scholarly, personalized liner notes. Jealous of the Moon (1995) and Terraplane (1998) align songs by Robert Johnson, Reverend Gary Davis, John Jackson and Mississippi John Hurt with traditional spirituals and original compositions Ainslie hopes “would sit solidly in that tradition without pretending to be ancient pieces.” Add to these recordings his lauded book Robert Johnson: At the Crossroads, a collection of historical notes about and intricate transcriptions of the Delta blues giant’s extant recordings, and Ainslie’s growing contribution to the tradition is formidable. “I try to deliver value on my own and hang on my elders. I don’t consider myself a bluesman in any sense of the word, but a blues musician, absolutely.”

Ainslie has performed and conducted residencies and workshops at schools and colleges internationally for nearly two decades, performing traditional songs while offering the colorful anecdotes about the artists’ lives that make the music expand, opening up the songs for the casual listener. Ainslie chuckles as he recalls such a moment during his stay in Ireland.

“People generally had no idea of the story behind ‘Amazing Grace,’ for instance,” Ainslie remembers. As he prepared to perform his unique arrangement of the song at a school gathering, an audience member informed Ainslie that in the British Isles there supposedly lived a woman named Grace, a lifeboat captain who saved 70 people in 15 different trips out into the ocean when a ship foundered there. This amazing woman, the locals had always heard, was the Grace heralded by the song. Ainslie broke it to them gently that the tune actually details John Newton’s personal deliverance from a perilous night at sea in the mid 18th century and his subsequent conversion to a life of faith.

“This kind of cross-cultural disconnect is everywhere,” he notes. His voice grows serious as he compares the racial divide which still plagues America with the sectarian divide in Ireland along religious and class lines. “I would explain the set-up of songs from a race-torn America and watch that information play across the faces of the Irish audience, watch it resonate and parallel with their own lives.”

Having come of age in the civil rights era, Scott Ainslie has long been interested in the power of traditional art forms “to invite dialogue about cultures and teach something nonverbal about the culture. Art can become a tactile part of your experience.” The visceral power of his live shows mightily achieves this end.

Ainslie’s guitar playing earns him critical attention, for he has slavishly apprenticed himself to unraveling and recreating the idiosyncrasies of phrasing and cadence that make each of his blues masters and their regions unique: the nasty, quick vibrato of Robert Johnson’s Delta slide. The dance and weave of The Rev. Gary Davis’ syncopated Piedmont finger picking. Yet Scott Ainslie’s singing voice is equally powerful, rich with experience and emotion. If his guitar is the authentic artifact that tethers the listener to the past, it is Ainslie’s brooding baritone that locates the listener in timeless human experience.

“Singing is the place where I’ve worked the hardest, where the journey has been the most personal, and where my soul has been most affected,” he reflects. “I’m not hoping to imitate black voice or speech or even singing values; my goal is to honor the tradition without co-opting or cheapening that tradition.”

Raised a self-accused “suburban white church singer” with little vocal training, Ainslie describes that young self as a careful singer, frightened about tone and pitch. “In order to begin to change my voice into what you hear now, I had to take the music critic in my head out into the alley and apprentice myself to what I think and hope black musicians apprentice themselves to: the broader physical connections of music, the spiritual aspects of the body as a holy part of making sounds. The white church tradition is anti-physical; the body is the problem, the source of sinfulness. The voice’s goal is that disembodied, angelic, unspoiled sound of the prepubescent boy soprano,” he pauses. “In the black church tradition the voice, in contrast, works as the lynchpin holding the spiritual and physical worlds together–in your body and not just Jesus’ body–by an acceptance of the body, its noises, its sexuality, and its funkiness.”

The year 2000 has seen many deserved recognitions of Ainslie’s work, for in addition to winning this Indies Award, he was tapped for the prestigious Sam Ragan Fine Arts Award from St. Andrew’s Presbyterian College, honoring distinguished service to the arts in North Carolina. Past winners include poet Shelby Stephenson, author Clyde Edgerton, and jazz musician and composer Loonis McGlohon. “The part that scared me the most was being thrown in with such magnificent company.” Ainslie’s voice evokes a charming mix of self-deprecating humility and firm conviction for the importance of his work. “My hope is to continue to justify their faith in the work I am doing.”

With all this talk of heritage and legacy, what sort of aspirations does Scott Ainslie hold for his own legacy in the state and beyond? “I’m too young to talk about summing up,” he says and laughs. “But without being presumptuous, I hope to contribute three Ainslie boys (my sons Gabriel, who is 14, Jesse, who is 17, and me) who, because of the nature of this cross-cultural journey, are not interested in the divisions of color or culture, but are interested in the differences so that we don’t have a mono-culture.”

Ainslie’s next project seems certain to contribute great “human capital” to this goal of celebrating and learning from differences. Ainslie and theater artist and performance poet Glenis Redmond are currently working on Southern Voices: Black, White, and Blues, a multimedia show combining spoken word, drama, and music. An African-American woman raised on foreign airbases without racial division, Redmond moved as a teen with her military parents back to their original home in South Carolina. “She was raised outside of black culture, thrust into it, and forced to survive,” Ainslie observes. “I’m looking at African-American culture as a different kind of outsider, as a Scottish-American suburban white kid who was hooked by the powerful music.” The show, slated for a winter-spring opening, aspires to explore issues of gender and race with the South as common ground, and with music and poetry as uncommon language.

Standing as an outsider, studying and listening attentively, raising his impassioned voice, Scott Ainslie is again treading unfamiliar ground with a desire to learn and a willingness to teach. He is Durham’s wayfaring stranger and he is right at home.

URL for this story: http://www.indyweek.com/gyrobase/Content?oid=14526