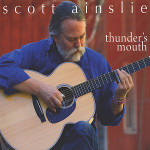 I’m gonna write a letter – telephone every town I know. [2x]
If she ain’t in West Helena – must be in East Monroe, I know.

I don’t want no woman – wants every downtown man she meets. [2x]
She’s a no good doney – they shouldn’t allow her out on the street.

I’m gonna call up China and see is my good girl over there. [2x]
If she ain’t in the Philippine Islands – – she must be in Ethiopia somewhere.

And I’m gettin’ up in the mornin’ -I believe I’ll dust my broom. [2x]
Girlfriend, that man you been lovin’, tell him he can have my room.

A solo blues track played on my road guitar, a 1931 National that came out of pawn shop in Columbus, GA. The song’s surprising place references and the timing of its original recording present us with remarkable bits of history that bring to mind the invasion of Ethiopia by the Fascists under Mussolini, Ras Tafari, and the Reggae culture of Jamaica.

See my Blues Notes entry about Dust My Broom.