A Benefit for the NC Symphony 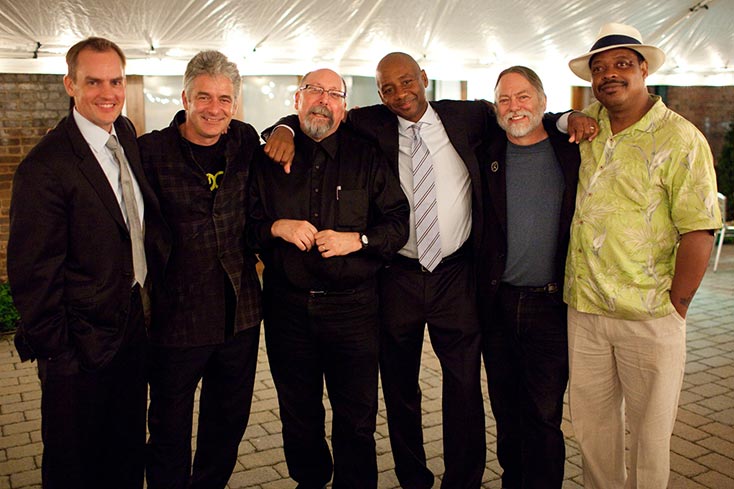 About a year ago, my friend Joe Newberry, began taking part in a series of conversations with the NC Symphony about broadening the symphony’s musical focus as a way of developing new fundraising opportunities. In addition to being a sturdy and brilliant old-time musician and songwriter, Joe also happens to be the Public Information Officer for the North Carolina Department of Cultural Resources.

Facing $8 million in budget cuts this year, the North Carolina Symphony enlisted Branford Marsalis and his longtime collaborator, pianist and composer Joey Calderazzo to help them out with a ‘Branford & Friends’ sort of concert. A lot of the pieces were in place, but the artistic staff at the symphony thought that something else was needed to round out the program.

In late April, I got a message on my answering machine from Joe. He was apparently sitting with conductor Grant Llewellyn puzzling over what the last piece of the musical puzzle might be, when he thought of me.

“Scott: this is Joe, buddy. Listen, I’ve got a proposition for you – and I want you to say ‘Yes’ without thinking about it. Just say ‘Yes,’…..” and Joe briefly laid out the date, the players, and the cause.

Yes, was the word.

So, we emailed mp3 files and song ideas back and forth and came up with a program. When asked, I wrote that in a perfect world, I would love to hear Joey and Branford play “It’s Gonna Rain” with me, a song off my latest release, “Thunder’s Mouth,”– a paean to New Orleans. Branford’s a Breaux Bridge boy. I got friends – actually more family than friends – on Bayou Teche. It’s a song I hoped we could meet in.

We all assembled at Meymandi Concert Hall in downtown Raleigh at around 2:30 on the day of the show. And we rehearsed all afternoon. Really. Until almost 6:00.

These guys are good.

So, on the evening of June 8th, a sold out crowd of 1700 enjoyed a varied program featuring Marsalis playing original jazz pieces with Calderazzo, Mozart with the symphony’s string quartet, an old-time string band, a female gospel soprano, a blues singer-guitarist, and a harmonica virtuoso. The evening raised more than $140,000 as the symphony closed in on narrowing the budget gap with sacrifices from the musicians, donations from the corporate world, and the sustaining support of musicians, patrons and the community.

“From the first minutes of our June 8 benefit concert, I think everyone in that sold-out concert hall suspected they were in for a musical adventure like none other. Some three hours later, the audience knew that to be true, having heard an amazing array of music performed by some of the most brilliant artists in the world.

“I don’t know how to really do justice to what took place, so let me just start by saying thanks to everyone who played a role on stage: our leader Branford Marsalis and his stupefyingly talented pianist Joey Calderazzo, Joe Newberry and his incomparable string band Big Medicine, our NCS string quartet of Rebekah Binford, Karen Strittmatter Galvin, David Marschall and Bonnie Thron that played so beautifully, the unstoppable Phil Wiggins on harmonica, Tina Morris-Anderson and her heart-stopping vocals, our new best friend Scott Ainslie – and of course our own Grant Llewellyn: emcee, host, pianist (!), and guest vocalist.

“It’s truly impossible to cite just a few moments as the highlights of what took place on stage at Meymandi Concert Hall…the evening was a spell-binding musical journey and made for a remarkable tribute to an orchestra – the North Carolina Symphony – that these artists all share as a common passion.”

Worters went on to thank the corporate sponsors and community leadership for their support of the symphony and this particular concert.

Late in the second set, Branford, Joey Calderazzo and I (all with heartfelt connections to Louisiana) did play “It’s Gonna Rain”– my song about lost love in New Orleans and south Louisiana that morphed into a requiem for the city after Katrina. The poignancy of the piece has been amplified by the oil continuing to pour into the Gulf of Mexico and the BP Deepwater Horizon explosion and fire. The performance was greeted with sustained applause.

At the end of the evening, I had the privilege of leading off with the first verse in an encore of Stephen Foster’s “Hard Times, Come Again No More,” with the full string quartet, Calderazzo on piano and Marsalis on sax, the string quartet and all hands on deck. Even Grant Llewellyn took a verse. The show closed in a torrent of applause.

We are all hoping to be able to work together again. There is already some talk of a Blues program with the full symphony down the road. And I’ll drive or fly anywhere to play with Joey and Branford again. Many new friends made on-stage and off. Musical meetings and friendships are rarely so easy, so quick, and so deep. So much good came of the evening, it’s hard to know where to start counting.