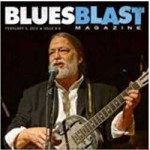 It could be something as complex and spiritual as destiny or even the perfect alignment of the stars with the planets.

Or, it could be something much simpler, something like a happy accident or even the stubborn refusal to give up pursuit.

Whatever you choose to call it, the end result is the same; Scott Ainslie ended up with a guitar he had long coveted.

And with that prized possession – a Gibson L-50, circa 1934 -nestled firmly in his hands, Ainslie’s latest album, The Last Shot Got Him (Cattail Music), was quickly given birth.

The album – with just Ainslie on guitar (plus a touch of banjo) and vocals – is like a love letter to another glorious time, a time when legends like Robert Johnson, the Rev. Gary Davis and Mississippi John Hurt were still alive and in their prime. Ainslie’s sixth solo offering seemed to strike a responsive chord with lovers of authentic acoustic blues far and wide…

Read more on their site, or download a pdf.